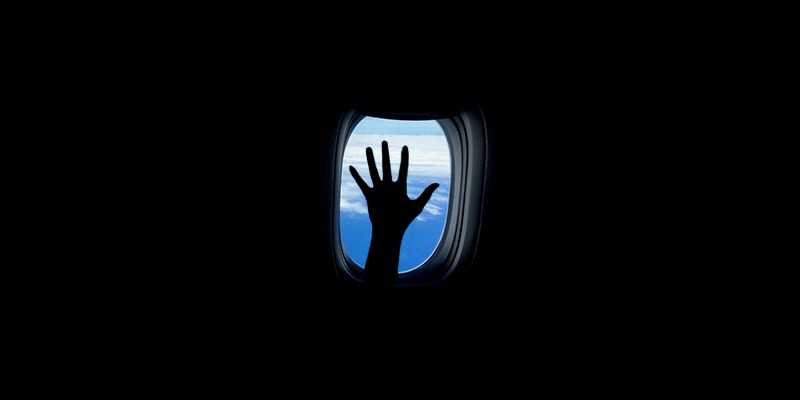 Blame it on… human or bad design?

On 20th September 2018, Thursday morning, Jet Airways flight 9W-697 landed back in Mumbai within 30 minutes of taking off from the airport. After 30 of the 166 passengers on board started bleeding and complained of headaches.
This happened because the pilots had not turned on the “bleed air” button upon achieving an altitude of more than 10,000 feet that would release air from the engine into the cabin meant for air conditioning. As a result of this lapse, the cabin pressure could not be maintained and oxygen masks were deployed.

Passengers with respiratory troubles were the ones immediately impacted by this until the pilots decided to turn back and land in Mumbai. “There was no support from Jet. We were suffocating. They made no announcements telling us what was going on,” said a passenger on board the flight. Another passenger said: “There were elderly persons on board. They couldn’t breathe. Then some of them started bleeding from their noses.”
Pending investigation, Jet Airways has de-rostered both the pilots of 9W-697.

Meanwhile, civil aviation minister has ordered the DGCA to conduct a comprehensive safety audit. Safety audit of all scheduled airlines, aerodromes, flying training schools and MROs immediately. The DGCA has been asked to submit a report within 30 days, and take corrective measures in case of any deficiencies.

What is bleed air?

WE HUMANS NEED AIR TO LIVE, so we do best around sea level. Airplanes are at their best up high, where the air is thin and smooth.
The engines pressurize air in an airplane. Turbofan engines compress intake air with a series of vaned rotors right behind the fan. At each stage of compression, the air gets hotter. Some air is diverted at the point where the heat and pressure are highest. A few of the hot, high-pressure air, called bleed air. Then sent to de-ice the wings and the other surfaces. Part of it goes to the systems operated by air pressure, and some starts its journey to the cabin.

On the ground, the airplane is unpressurized and the outflow valve is wide open. The pilot sets the cruise altitude on a cabin pressure controller during preflight. The airplane may be climbing at thousands of feet per minute. But inside the cabin, the rate of “climb” is approximately what you might experience driving up a hill. It might take an average airliner about 20 minutes to reach a cruise altitude of, say, 35,000 feet, at which point the pressurization system might maintain the cabin at the pressure you’d experience at 7,000 feet: about 11 pounds per square inch. Your ears may pop, but the effect is mild because the climb rate is only 350 feet per minute. When the airplane descends, the pilot sets the system controller to the altitude of the destination airport, and the process works in reverse.

Federal Aviation Regulations say that without pressurization, pilots begin to need oxygen when they fly above 12,500 feet for more than 30 minutes, and passengers have to use it continuously above 15,000. On airliners that operate at altitudes well above that, regulations require that everyone aboard be supplied with 10 minutes of oxygen in the event the cabin pressure can’t be maintained, which brings us to the dramatic scenario known as explosive decompression.

Whom to blame? Human or bad design?

The real question is: will safety audit throw light on what appears to be, a case of human error? Pilots need to follow all Boeing 737s’ checklist on safety protocols that which clearly mentions turning on “engine bleeds” after take-off.
In this case, what sources indicate is that, the pilots did not turn on the “engine bleeds” before take-off since they wanted to utilize maximum engine air to make the aircraft airborne. While that is a call that pilots are entitled to take on the basis of the “load”, it is mandatory to turn on the bleed air switch after take-off. Unfortunately the cockpit crew of 9W-697 forgot, resulting in serious consequences for the passengers on board.

If unfortunately the cockpit crew forgot to turn on the bleed air switch after take-off, why did the machine not notify it? Since this is a crucial life and death scenario then why it is dependent on only human and not supported by the machine? Why there is a chance to commit the error?
In my opinion its not a human error; its a BAD DESIGN!

What should we do?

UX (User Experience) Audit considers users’ journey and behavioral patterns during completion of any task. UX Audit analyzes all the possible errors that might have minor, major, or fatal error impact. Some might have life threatening errors. UX audit is mainly based on Jakob Nielsen usability heuristic standards. There are main 10 standards. However, in this case visibility of system status, error prevention, and recognition rather than recall need to consider.

Visibility of system status: The system should always keep users informed about what is going on, through appropriate feedback within reasonable time.
Error prevention: Even better than good error messages is a careful design which prevents a problem from occurring in the first place. Either eliminate error-prone conditions or check for them and present users with a confirmation option before they commit to the action.
Recognition rather than recall: Minimize the user’s memory load by making objects, actions, and options visible. The user should not have to remember information from one part of the dialogue to another. Instructions for use of the system should be visible or easily retrievable whenever appropriate.

UX should be mandatory!

There are lot of bad designs around us. Only audits like safety or quality won’t be sufficient. Any bad design can end up with life threatening disasters. We need to design our surroundings that will help us to complete our tasks without any issues. UX is everywhere right from nuclear plants to our bathroom taps. UX is all over the things we use everyday. If there is life involved then make UX audit mandatory in my opinion.

That will help us to make this world beautiful, seriously!

Your email address will not be published. Required fields are marked *

Let's discuss your next project

Whatever your ambition, we’d love to design and build your next big idea or lend a hand on an existing one.